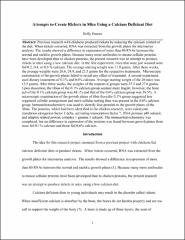 Previous research with chickens produced rickets by reducing the calcium content of the diet. When rickets occurred, RNA was extracted from the growth plates for microarray analysis. The results showed a difference in expression of more than 80 RNAs between the normal and rachitic growth plates. Because many more antibodies to mouse cellular proteins have been developed than to chicken proteins, the present research was an attempt to produce rickets in mice using a low calcium diet. In the first experiment, mice that were just weaned were fed 0.2, 0.4, or 0.6 % calcium. The average starting weight was 11.8 grams. After three weeks, the average weights were 26.6, 24.9, and 23.5 grams for the respective treatments. Microscopic examination of the growth plates failed to reveal any effect of treatment. A second experiment used dietary treatments of 0.1% and 0.6% calcium. Average starting weight of the 20 mice was 13.5 grams. After three weeks, the weights of the respective groups were 27.2 and 27.6 grams. Upon dissection, the tibias of the 0.1% calcium group seemed more fragile; however, the bone ash of the 0.1% calcium group was 44.1% and that of the 0.6% calcium group was 39.5%. A microscopic examination of the growth plates of tibia from the 0.1% group suggested less organized cellular arrangement and more cellular netting than was present in the 0.6% calcium group. Immunohistochemistry was used to identify four proteins in the growth plates of the tibias. The proteins, which had been identified in the chicken research, were eukaryotic translation elongation factor 1 delta, activating transcription factor 7, DNA primase p49 subunit, and adaptor related protein complex 1 gamma 1 subunit. The immunohistochemistry was completed, but no difference in expression of the proteins was found between growth plates from mice fed 0.1% calcium and those fed 0.6% calcium.