A Quantitative Study of Chromaticism: Changes Observed in Historical Eras and Individual Composers 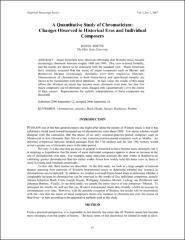 Music historians have observed informally that Western music became increasingly chromatic between roughly 1600 and 1900. This view is tested formally, and the results are shown to be consistent with the standard view. Music historians have similarly assumed that the music of major composers such as Mozart and Beethoven became increasingly chromatic over their respective lifetimes. Measurements of chromaticism in both theme-based and opus-based samples are shown to be inconsistent with these intuitions. At face value, the results of this study affirm that Western art music has become more chromatic over time, but that five major composers' use of chromatic tones changed little (quantitatively) over the course of their careers. Repercussions for stylistic interpretations of these composers are discussed.