Learning Experiences and Misconceptions of Vision 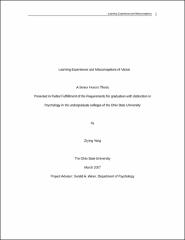 This research studied a misconception held by many college students, namely, the belief that emissions from the eyes occur when see, which was consistent with the extramission theory of perception held by some early Greek philosophers (Gregg et al., 2001). The present study was designed to measure if different readings about vision in combination with the use of pretests could overcome participants’ misconception of extramission beliefs. Two hundred and thirty-one college students participated in the study and were randomly assigned into one of the eight conditions. Half of the participants were given an extramission pretest and the other half were not. All of them were given either one of the three experimental readings or the control reading following by an extramission posttest. The experimental readings included basic information about vision. Along with the experimental readings were interventions I predicted could reduce misconceptions. Participants in all experimental (total of six) conditions showed improvement in performance compared to those in the control group. That is, the presence of a pretest in combination with a vision reading in general improved performance. This finding on the impact of the readings was surprising and was rarely observed in published studies.