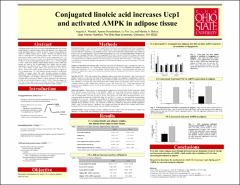 Conjugated linoleic acid (CLA) is a group of polyunsaturated fatty acid isomers found naturally in ruminant products such as milk and beef. CLA reduces body weight and adipose mass in a variety of species. However, the mechanism by which CLA depletes adipose mass is unclear. Therefore, the objective of this study is to determine how CLA reduces adipose mass. 6-week old, male ob/ob mice were fed either a control diet (CON) or a diet supplemented with 1.5% mixed isomer CLA (CLA) for 4 weeks. CLA significantly reduced body weight (28.98 g vs. 42.20 g) and epididymal adipose mass (1.71 g vs. 2.96 g) compared to CON. While CLA generally induces hepatic steatosis in mice, which may account for some of the fat mobilization, here, neither liver nor muscle triglycerides were affected by CLA. Similarly, no markers of lipid oxidation, such as Cpt-1, Ppara, or Acox1 mRNA, were altered by CLA in the liver or muscle. Notably, these markers of lipid oxidation were not altered or reduced by CLA in adipose tissue. CLA did, however, increase activation of AMP-kinase (AMPK), an energy sensor that, when activated, increases β-oxidation. Interestingly, mRNA expression of Ucp1, a mitochondrial protein involved in energy dissipation, was increased ~109-fold by CLA. Concomitantly, CLA increased mRNA expression of Pgc1a, a cofactor important in the upregulation of Ucp1 and mitochondrial biogenesis, nearly 2.5-fold. These data suggest that CLA may reduce adipose mass by increasing β-oxidation through increased activation of AMPK and increased energy dissipation by Ucp1 in adipose.