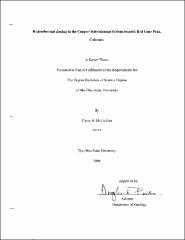 Red Cone Peak is about 50 miles southwest of Denver, Colorado, and five miles south of the town of Montezuma. The Red Cone igneous complex centered approximately 0.5mi. south of the Continental Divide is within the Colorado Mineral Belt, a zone of igneous bodies and associated hydrothermal mineralization that crosses the mountainous part of Colorado from southwest to northeast. Mineralization within the Mineral Belt is associated with igneous activity that likely accompanied east-directed subduction of the Farallon Plate beneath North America as the Rocky Mountain Cordillera of western North America formed. This research addresses a fundamental question: was there an early copper-rich event in the Mineral Belt that has gone unrecognized, and which may be related genetically to the well known molybdenum event that to date has characterized large-scale mineralization in the Mineral Belt? The Red Cone complex intruded from 41 to 37 million years ago, which was 5 to 10 million years before the formation of the world-class molybdenum deposits at Climax (15mi. to the southwest southwest of Red Cone) and Henderson (12mi. to the northeast). The timing of the intrusion of at Red Cone Peak, and the characteristics of the hydrothermal mineralization likely put it in a category that is unique from the Climax and Henderson deposits. Samples from a 2000 foot drill core at Webster Pass, a little over 0.5 miles northwest of Red Cone Peak have been used to characterize the lateral extent of the hydrothermal mineralization, and the presence of vertical zoning within the margin of the Red Cone complex. Rocks in the vicinity have been pervasively mineralized with pyrite, and polished thin sections were made from samples collected at nine locations down the core. Copper and other trace elements (including molybdenum and gold) were analyzed for in the polished thin sections using scanning electron microscope (SEM) techniques. The analysis focused on individual pyrite grains with the thought that trace element variation, such as copper, might reveal subtle metal zoning in this part of the Red Cone System. Zoning with depth was not revealed in the WP-I core. These data document variations in the trace element compositions of pyrite with depth in the igneous and hydrothermal systems. The Red Cone complex displays characteristics of a large porphyry-type metal system. The Climax and Henderson deposits are two of the richest molybdenum deposits in the world, and they provide clues to understanding the emplacement and zoning of the rocks at Red Cone Peak, clues that will help to understand the porphyry mineralization and its place in the evolution of the Colorado Mineral Belt.