A Paleomagnetic Study of a core of Upper Ordovician Limestone from the area near Minerva , Kentucky 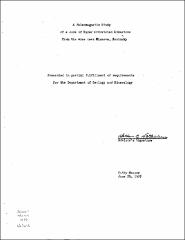 A paleomagnetic study of 20 feet of borehole core of Upper Ordovician age has revealed several geomagnetic polarity reversals at various depths. No correlation is found between lithology (which varies from limestone to shale) and polarity. Experimental determination of the best field for removal of soft viscous components of natural remanence was found to be 600 Oe. After demagnetization, the average inclination of the paleomagnetic field was found to be 26.0°. This mean inclination was calculated for the upper twenty feet of core using ten cores with feversed polarity with an inclination of 40.0° and eight cores of normal polarity with an inclination of 12.1°. From this a calculated paleolatitude of 13.7°S. for North America during the Upper Ordovician is in fairly close agreement with results previously obtained, A virtual geomagnetic pole is simply interpolated from Middle Ordovician and Upper Silurian data.