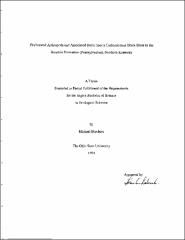 A new species of phyllocarid crustacean, Dithyrocaris rosarius, is described from a 40-cm-thick carbonaceous black shale in the Breathitt Formation (Pennsylvanian) along Kentucky Highway 546 (AA Highway), approximately 30 km east of Vanceburg, Kentucky. The biota of this carbonaceous black shale consists of common D. rosarius, common plant fragments, and less common bivalves (Posidonia), gastropods, and brachiopods (Leiorhynchoidea and J Linoproductus). Sparse trace fossils are also present. They include coprolites that contain phyllocarid? fragments; indeterminate, vermiform horizontal burrows; and Zoophycos. Beds are thinly laminated and seem to have been only rarely disturbed by bioturbation. The black shale has been previously interpreted to represent a time of maximum transgression in a transgressive-regressive marginal marine-to- marine cyclothem. However, evidence for a deep marine origin of the carbonaceous black shale is ambiguous. Thinly laminated black shales with sparse bioturbation and undisturbed coprolites indicate only that the sediment was commonly anoxic; the water column was probably oxic at least intermittently. The presence of articulated phyllocarid arthropods in the black shale seems to offer no reliable clue to water depth. The presence of relatively well articulated phyllocarid remains does not necessarily imply burial in marine settings below storm wave base, nor does it even guarantee that they were buried in exactly the same place where they lived. The inferred habitats of phyllocarids, the presence of abundant coalified plant remains, the lithology, and stratigraphic relationships seem to argue more strongly for a marginal marine setting for the carbonaceous black, shale than they do for a deep marine setting.