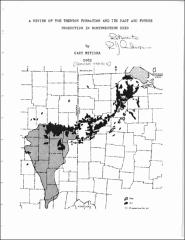 Beginning in the late 1800's in northwestern Ohio,discoveries of natural gas and later oil gradually revealed what today is known as the Lima-Indiana field, one of the largest ever in North America. The production of this field was initially quite strong. However, because gas rather than oil was the sought resource, and primative recovery techniques were used, it was short-lived. It is quite probable that a large percent of the oil remains, oil previously unprofitable to attain. Virtually all the production came from the Trenton Formation, an extensive limestone, locally dolotimized, creating porous zones capable of trapping hydrocarbons. Structural features and stratigraphy, along with porousity, contribute to the Trenton's reservoir characteristics. As energy and economic demands for oil and gas continue to climb, renewed production and increased recovery become more desireable and further detailed analysis of this generally abandoned area may be worthwhile.