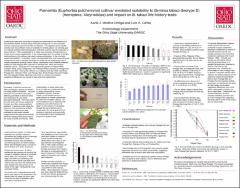 Greenhouse trials were conducted to evaluate the performance and preference of the silverleaf whitefly, Bemisia tabaci (Gennadius) biotype B, on nine poinsettia cultivars, Euphorbia pulcherrima Willd. ex Klotzsch. The objective was to identify varieties that show different levels of suitability for whitefly attack. Our ultimate goal is to identify potential tolerance/resistance traits that could be used for production of future cultivars. Plant susceptibility to B. tabaci was compared among cultivars in choice and no-choice experiments. In the choice experiment the number of whitefly adults settling on the cultivars was used to assess preference. In the no-choice experiment whiteflies F1 oviposition, nymph developmental time, and survivorship was measured and used to develop life tables and obtain the net replacement rate of whitefly populations growing in each cultivar. Significantly more whiteflies preferred settling on Early Prestige Red compared to Prestige Red, which was the less preferred among all cultivars. Fecundity of F1 was significantly greater on Freedom Red, Freedom White, Early Prestige Red, and Peterstar White compared to Prestige Red and Enduring Red, suggesting favorable traits for whiteflies. Among the cultivars accumulating more dry matter were Early Prestige Red, Peterstar White, and Prestige Red. Early Prestige Red and Prestige Red had opposite whitefly responses, but similar dry matter accumulation, suggesting differences may be due to other traits than rapid growth.