Nutrient-mediated interaction between above- and below-ground herbivores of poinsettias 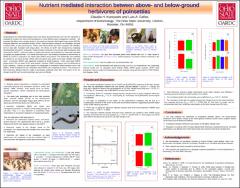 Understanding the relationship between above and below ground herbivores and how this interaction is mediated by nutrition can lead to the development of more efficient insect management methods. We evaluated the effect of two nitrogen levels on the interaction between darkwinged fungus gnats (DWFG), Bradysia difformis, and silverleaf whitefly (SLWF), Bemisia tabaci biotype B, on poinsettias and their combined effect on plant performance. Plants were infested three days after transplant with whiteflies, and ten days after transplant with fungus gnats. The effects on SLWF were measured by evaluating developmental time and F1 oviposition. Pupae numbers remaining in the soil and adult emergence were measured for DWFG. Herbivore impact on plant performance was evaluated by measuring total plant dry weight and photosynthesis. Our results show that SLWF was positively impacted by the presence of DWFG as SLWF F1 oviposition was higher when DWFG were present. This relationship was mediated by nutrition as we found stronger effects when the plants were grown at the high nitrogen level (150 mg/L). Conversely, DWFG were negatively impacted by SLWF presence. There were fewer DWFG pupae found in the soil when SLWF were present. However, DWFG emergence was not influenced by SLWF presence. Overall, our data supports the hypothesis of competition effects between SLWF and DWFG. SLWF benefited from the competition while DWFG were negatively impacted. The presence of both herbivores affected total dry weight of poinsettias, especially when they were grown at the low nitrogen level (50 mg/L) but photosynthesis rate was not affected.