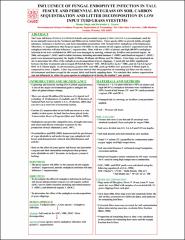 Turf type tall fescue (Festuca arundinacea Schreb) and perennial ryegrass (Lolium perenne L.) are commonly used for lawns and golf courses in the Northeast and Midwestern United States. These species differ in growth habits, drought tolerance, resistance to herbivory, and form mutualistic associations with Neotyphodium endophytes (Clavicipitaceae). Therefore, we hypothesized that the grass species will differ in the amount of soil organic carbon C sequestered and the endophyte infection will also influence C sequestration. Plots with low (<30% of plants) and high (80-95%) endophyte infection levels were established in 1999 and were managed by mowing, without any fertilizer and pesticide inputs. In 2006, soil organic C (SOC) and its labile fractions, including microbial biomass C (MBC) and dissolved organic C (DOC) pools were measured separately for depths 0-30mm, 30-60mm, 60-90mm, and 90-120mm. Litter bags were incubated on site to determine the effect of the endophyte on decomposition of grass clippings. C pools did not differ significantly between the four treatments and averaged 25.9(±1.8) Mg ha-1 SOC, 305.2(±23.1) kg ha-1 MBC, and 62.7(±5.4) kg ha-1 DOC in 0-120mm depth. In all treatments, greater SOC and MBC pools (p<0.001) were present in 0-30mm depth as compared to lower 3 depths. Litter bag extractions showed that the proportion of remaining leaf litter was the same in all treatments and times except for the second, third, and fourth sampling dates. We conclude that carbon sequestration was not influenced by either the grass species or endophyte level during the studied 7 year period.