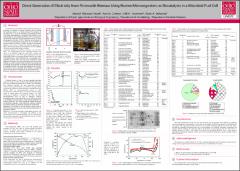 Microbial fuel cells (MFCs) are bio-electro-chemical reactors in which bacteria as biocatalysts mediate the direct conversion of chemical energy stored in organic compounds into electrical energy. The technology holds great promise for production of sustainable energy from renewable biomass. The objectives of this study were: 1) to test the possibility of generating electricity from the most abundant renewable biomass on earth: cellulosic wastes, and 2) to characterize the microbial composition and electron transport mechanisms of rumen microorganisms when used as biocatalysts in MFCs. Maximum power density of 55 mW/m2¬¬ was produced and sustained for over two months with periodic addition of cellulose. Cellulose hydrolysis and electrode reduction were shown to support the electricity generation in MFCs. Cloning and sequencing analysis of 16S rRNA genes indicated that the most predominant bacteria in the anode-attached consortia were related to Clostridium spp., while Comamonas spp. were abundant in the planktonic consortia. MFC tests and cyclic voltammetry results suggested that the anodic electron transport was via soluble electron shuttles excreted by bacteria and also through the attachment of membrane-anchored biomolecules to the anodic electrode. The results demonstrated for the first time that electricity can be generated from cellulose by exploiting rumen microorganisms as biocatalysts. The study also adds to the diversity of microorganisms that have been shown to produce electricity in MFCs. This system has potential for generating electricity from a wide range of agricultural and industrial cellulosic wastes such as crop residues and scrap paper, readily available in many parts of the world.

This project was partially funded by the Ohio Agricultural Research and Development Center and the College of Food, Agricultural and Environmental Sciences at The Ohio State University.