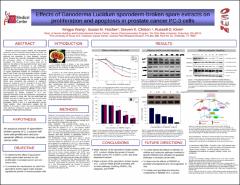 Ganoderma Lucidum (Linzhi or Reishi), the most popular mushroom used in Traditional Chinese Medicine (TCM), has been used in Asian countries over thousand years for the treatment and prevention of many diseases, including cancer. However, the molecular mechanisms responsible for the anti-cancer effects of G.Lucidum remain to be elucidated. The objective of the current study was to determine the effects of the sporoderm-broken spore water extracts (SBSWE) of G.Lucidum on cell proliferation, apoptosis and the molecular targets in prostate cancer PC-3 cells. Our data demonstrated that the SBSWE (1.25 mg/ml -10 mg/ml) significantly inhibited the proliferation of PC-3 cells in both a time- and dose-dependent manner. Western blot revealed that the growth inhibitory effects were associated with activation of caspase-9, caspase-3, caspase-6, and the cleavage of the poly (ADP-ribose) polymerase (PARP) in PC-3 cells. In addition, the phosphorylation of the extracellular signal-regulated kinase (Erk) was significantly inhibited by SBSWE in both a time- and dose-dependent manner. However, the activity of p38 was significantly upregulated by SBSWE treatment in these cells. We also determined that SBSWE were able to inhibit the growth of the normal human prostate epithelial isolate PrEC and the prostate non-tumorigenic RWPE-1 cells in a dose-dependent manner. Taken together, these observations suggest that the SBSWE of G.Lucidum contain very potent phytochemicals which effectively inhibited the growth of prostate PC-3 cells by targeting multiple signaling pathways.

Vivian Grant from the department of human nutrition.