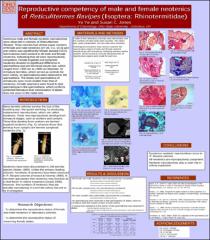 Numerous male and female neotenic reproductives were observed in colonies of Reticulitermes flavipes. Three colonies had almost equal numbers of female and male neotenics (37:35, 4:2, 10:3) and one colony was significantly female skewed (10:2). Spermatozoa were present in all male and female neotenics, indicating that all were reproductively competent. Female ergatoid and nymphoid neotenics showed no significant difference in spermatheca size and terminal oocyte size, which ranged from <200 um to >800 um diameter. In immature termites, which served as controls for each colony, no spermatozoa were observed in the spermatheca. The testes and spermatheca of immatures were much smaller than that of neotenics. Female swarmers were found to lack spermatozoa in the spermatheca, which confirms published literature that insemination of alates does not occur in the natal nest.