Responses of paper birch (Betula papyrifera) to fertilization and amendment with a commercial mycorrhizal inoculant in two contrasting soil types. 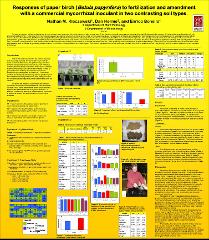 The poor soil structure and fertility characteristic of urban soils are known to decrease the growth and survival rates of urban trees. Trees planted in such soils are more prone to damage by drought, flooding, and other stresses. It is believed that amending urban soils with ectomycorrhizal fungi (EMF), i.e. fungi that form one of several mutualistic associations with tree roots, improves tree growth and survival and decreases the need for soil fertilization and management. We tested a commercial mycorrhizal inoculant in nutrient and structure deficient subsoil, with and without fertilization, for effects on physiological traits and drought tolerance of paper birch (Betula papyrifera). Results were contrasted to those from equivalent treatments imposed on trees growing in nutrient and structure rich field topsoil. Measurements of photosynthesis, growth rates, total phenolics, and EMF abundance and diversity were made. Data obtained from small experiments conducted under laboratory light banks showed that the mycorrhizal inoculant promoted growth of paper birch seedlings while improving EMF colonization rates. In contrast, a larger greenhouse study showed no effects of the mycorrhizal inoculant on growth, productivity, or drought tolerance of seedlings. Although ectomycorrhizae were present on greenhouse seedlings, fungi present in the mycorrhizal inoculant did not form them; rather, they apparently were formed with fungi naturally present in the soil. In conclusion, the preponderance of the data suggests that treatment of trees with commercial mycorrhizal inoculants may not be as beneficial to urban trees growing in poor soil conditions as improving soil composition and structure.