Students' Taste for Organic Food: A Look Into Perceptions 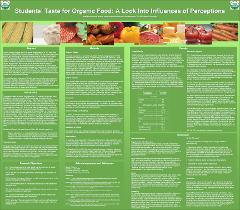