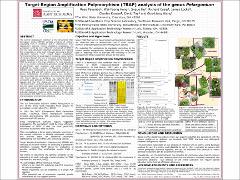 The current Pelargonium collection at the Ornamental Plant Germplasm Center (OPGC) consists primarily of cultivars originating from P. ×hortorum and P. ×domesticum. Since Pelargonium cultivars require vegetative propagation, the germplasm could be more efficiently maintained at OPGC if only the most genetically dissimilar accessions are retained; that necessitates a large scale molecular screening to identify redundant cultivars. TRAP (Target Region Amplification Polymorphism) has the advantage of producing a large number of markers through the use of sequence information that is already available. Our goal was to determine the feasibility of TRAP for analysis of this large collection. For most accessions, one or two primer combinations generated enough fragments to discriminate each accession, and similar clades were produced by cluster analysis of fragments amplified by different primer combinations. All the scorable fragments were polymorphic, 148 and 160 markers were scored for the two primer combinations. In another analysis, two multiplexed reactions yielded two dendrograms. In a dendrogram of plants with known species or pedigree, we observed that the accessions were generally in clades with others of the same species, but that the clades were less distinct when P. ×hortorum and P. ×peltatum hybrids were included. In spite of this, the clades were still divided according to their taxonomic sections. A second dendrogram was generated with the data from accessions that were potential duplicates, and most potential duplicates clustered close together. These results demonstrate that TRAP is an effective method for molecular characterization of ornamental collections.