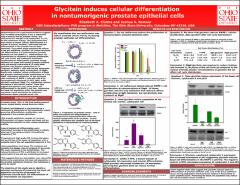 Epidemiological and experimental evidence suggests that increased consumption of soy is associated with a reduced risk for prostate cancer. Soy isoflavones are thought to be responsible, in part, for this anticancer activity. Soy isoflavones have been shown to induce cellular differentiation in a number of tissues. However, isoflavone-induced differentiation in the prostate has not been examined. The present study examined the effects of the soy isoflavone, glycitein, on luminal and basal cell differentiation in a nontumorigenic prostate epithelial cell line (RWPE-1). Differentiation was characterized by inhibition of cellular proliferation, cell cycle arrest, and cytokeratin expression. Cytokeratins are differentially expressed among epithelial cell types with luminal prostate epithelial cells expressing cytokeratins 8/18 while basal epithelial cells express cytokeratins 5/14. Treatment of RWPE-1 cells with the soy isoflavones genistein, daidzein, equol, and glycitein (0-50microM) significantly inhibited cellular proliferation at 50microM and glycitein inhibited cellular proliferation at 5 and 50microM. Expression cytokeratin 18 was increased upon treatment of RWPE-1 cells with the positive control N-(4-hydroxyphenyl) retinamide (4-HPR, 1microM), while glycitein treatment (50microM, 8 d) significantly reduced expression of this luminal marker. These data suggest that glycitein may induce basal cell differentiation in the RWPE-1 cell line. Maintaining the basal cell population within the prostate may represent a novel mechanism by which soy isoflavones reduce prostate cancer risk.