The description and phylogenetic placement of two new species of Pythium 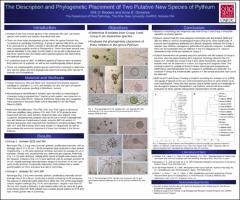 During a survey of corn and soybean fields in Ohio for seed and seedling pathogens, several species of Pythium were recovered and identified, as well as two distinct morphological groups. These two distinct morphological groups were evaluated for their pathogenicity on corn and soybean and sensitivity to fungicides used as seed treatments for corn and soybean. In addition, the sequence of the ITS1, 5.8s, and ITS2 genes of the ribosomal DNA was used to determine the phylogenetic position of these two putative new species within the genus Pythium. Both species were found to be pathogenic on both corn and soybean, and were insensitive to both mefenoxam and azoxystrobin in vitro. The two new species possess internally proliferating sporangia which produce zoospores in a vesicle placing them in the genus Pythium by morphology. Based on the morphological and sequence data these are two new species, grouped with several other species of Pythium with proliferating sporangia, which appear to be more closely related to several Phytophthora species than to species of Pythium which possess globose or filamentous sporangia. The identification and placement of these two new species has added to the knowledge base of this group of species which belong to the genus Pythium but are phylogenetically close to Phytophthora. Additionally, both of these species appear to be important pathogens of corn and soybean, and may be selected for their insensitivity to seed treatment fungicides.