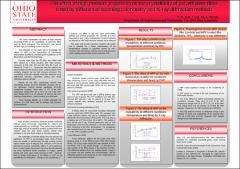 High pressure processing (HPP) of certain foods has grown significantly in recent years. It can be used to process foods safely and leave them with more natural flavors and higher nutrient content when compared to thermal processing. However, there is limited information on how HPP affects the crystallinity of polymeric packaging materials. The objective of this study was to investigate the effects of HPP on the morphology of low-density polyethylene (LDPE) by monitoring the crystallinity of the films before and after the treatments. Pouches made from the PE films were filled with 95% ethanol as a food simulant, then high pressure processed at 200, 400, 600 and 800 MPa for 5 and 10 minutes at 25 and 75°C. The pouches were then opened, the liquid empted and the pouches dried. Control samples were similarly prepared but not high pressure processed. The crystallinity of the film samples were then measured using differential scanning calorimetry (DSC) and X-ray diffraction testing methods. Results of the DSC experiments showed that crystallinity changes were not detectible. However, the X-ray diffraction method showed significant (P<0.05) crystallinity increases. These were: 1) 2.37 % for HPP temperature change from 25 to 75°C; 2) 1.15 % for HPP time change from 5 to 10 minutes; 3) 14.91% for HPP intensity change from 0.1 MPa (control) up to 800 MPa. These findings allowed us to better anticipate the behavior of LDPE films used to package high pressure processed foods.