Why Eastern Women Matter: The Influence of Byzantine Empresses on Western Queenship during the Middle Ages 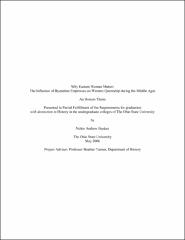 My research proposes that the imperial women of the east had an important and discernable influence on the royal women of the west. In order to show this influence I examine the nature of western queenship by analyzing the Merovingian, Carolingian, and Ottonian dynasties. I explore the varied roles of western queens-- as mothers, religious patrons, and regents. After establishing the nature of queenship, I analyze two ruling dynasties which had close and material ties to the Byzantine Empire: the Carolingians and the Ottonians. Through marriage proposals and ceremonial borrowing the Byzantines influenced the way Carolingian queens viewed and exercised their position. When Otto II married the Byzantine princess Theophano, he introduced an eastern empress into the western world, an event that most assuredly shaped the exercise of power in the office. In the end I hope my work will contribute to our understanding of queenship in Western Europe and the importance of Byzantine culture in the heritage of the west.