No Child Left Behind, Ohio and the Hispanic/Latino Population 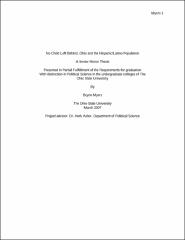 The No Child Left Behind (NCLB) legislation was an expansive piece of legislation that not only increased the role of the federal government in education, but also drastically shifted the focus of educational policy to a world of extensive testing and standards. The central focus of NCLB is a push to realize broad gains in student achievement and to designate a system of accountability for schools, districts, and states. One of the motivations is the tremendous disparity in students’ performances. For example, nine year olds growing up in low-income communities today are three grade levels behind their peers in high-income communities. Half of them won’t graduate from high school. That disparity led me to investigate educational policy and how it affects at risk students. From there I targeted my thesis within limits of personal interest and relevance. For policy, I chose to evaluate the major new education policy – No Child Left Behind. In terms of narrowing its scope, I tailored it to my own strengths and experiences in addition to where I saw gaps in current study – the effect of No Child Left Behind reforms on the Hispanic/Latino population within Ohio. Advisor: Herb Asher