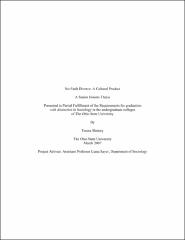 This thesis examines the adoption of no-fault divorce laws through sociology of law functionalist and conflict/feminist perspectives. Previous research on the adoption of no-fault divorce laws has focused primarily on the after math, but little attention has been paid to those factors influencing which states' adopted these laws. This paper will look at the discord between written laws and laws in action and the gendered opportunity structures in each state to determine what relationship exists between these factors and the adoption of two types of no-fault divorce. The results indicate states that adopted a pure no-fault divorce system, one that eliminates fault from divorce and alimony decisions, were more likely to have a greater dissonance between their written laws and the laws' actual application compared with those states that retained the use of fault in alimony allotments. States that adopted a pure no-fault system also had more open gendered opportunity structures than those that retained fault in alimony.