The Conjectural Battle Between Good and Evil: Alcohol, the U.S. and Mexico 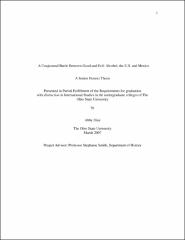 United States’ stereotypes against Mexicans have a deep history. The relations between these two countries have had its share of pessimism. The first traces of these negative attitudes begin from the time of the Anglo migration into Texas into the U.S.-Mexican War in 1848. It was obvious that many U.S. citizens lacked respect or compassion toward the Mexican "peons" who they thought owed them money, land and servitude. The fact that Mexicans were different in color, culture and country was enough for Anglos to form a racist generalization. After the creation of border towns during U.S. prohibition, the United States citizens who already associated “[Mexican’s] character with treachery, cruelty, and servility” seemed to have more proof that the U.S. was “now in the power of men who possessed all the vices of savage life without one of the virtues that civilization teaches.”1 Even though these border towns housed prostitution, drugs, and gambling, liquor became the one vice that had the greatest impact. After the U.S. passed national prohibition laws in 1920, U.S. citizens crossed the Mexican border to buy cheap drinks without fear of being arrested. Old taverns became more popular while U.S. entrepreneurs began to invest money in the growing number of saloons and clubs. From these clubs grew other forms of criminality, such as smuggling, thievery and counterfeiting. Alcohol emerged as the scapegoat for many problems that happened in border towns. Throughout this paper I will argue that the influence of alcohol on the border town mystique created the greatest strain on the social and political relationship between Mexico and the U.S. Understanding the complicated relationship between Mexico and the U.S., and evaluating their historical background, is an essential element of this study. Alcohol during U.S. prohibition was one of the most important links between the U.S. and Mexico, even when one considers the tense history between the two countries beginning with the Texas settlers in the 1800s, Manifest Destiny, the Mexican Revolution, and finally ending with refugee camps on the border. Using alcohol as a tool of analysis to help define the clouded historical perceptions of many U.S. citizens reveals a confusion of cultures that only led to greater gaps of misunderstanding across the border. Advisor: Dr. Stephanie Smith