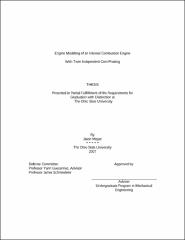 In the modern world, one of the largest concerns is the ever depleting supply of oil. The automotive industry is especially impacted. In recent years the price of gasoline has fluctuated substantially and the price of crude oil has reached record highs. The high price of gasoline coupled with the uncertainty of its availability and future price have put a high priority on fuel economy of an engine. In addition the emissions released from internal combustion (IC) engines are polluting the atmosphere. Many studies have linked the greenhouse gases produced by an automobile engine to the partial destruction of our atmosphere and to global warming. As a result the US government is passing stricter and stricter emissions regulations. These major issues are putting pressure on automakers to develop new technologies to increase the fuel economy and decrease the emissions while maintaining or improving the engine’s performance. Several new technologies have resulted. All of these technologies accomplish these goals by increasing the efficiency of an engine. As a whole these technologies are called variable valve actuation. These technologies achieve a higher efficiency by reducing the constants of the engine. However, the added variability increases the time to calibrate an engine. To address this, more testing is being performed using engine simulations instead of physical testing. This thesis focuses on how to create an engine model and how engine simulation can be used to optimize such an engine. In addition the benefits of a particular variable valve actuation technology, cam phasing, will be explored. Advisor: Yann Guezennec