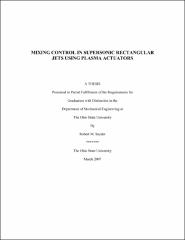 The flow through the exhaust nozzle of a jet engine has been of crucial importance in aerospace applications over the past several decades. A variety of modifications can be made to the nozzles of high-speed jet engines to increase or decrease mixing between the exiting flow and the ambient air; including adding tabs, chevrons, or actuators. Localized arc filament plasma actuators (LAFPA) developed in the Gas Dynamics and Turbulence Laboratory at The Ohio State University have both high amplitude and bandwidth and are suitable for active control of high-speed, high Reynolds number flows. These actuators were implemented on a rectangular nozzle in order to optimize the efficiency of mixing enhancement between the jet and the ambient air. Actuators were tested for a Mach 2.0 flow over a wide range of forcing frequencies and the effects were evaluated using flow visualization techniques. Results show the effects of forcing frequency and other parameters on the development of large-scale structures within the flow. Flow visualization testing over a broad range of forcing frequencies and duty cycles revealed the presence of large coherent structures and thus most favorable mixing enhancement in the 6-8 kHz (StF = 0.15-0.2) range. The m = ± 1 (flapping) mode produced a clear pattern of alternating structures within the aforementioned frequency band. It was also observed that the effect of varying duty cycle within this frequency range has little effect on the control authority.