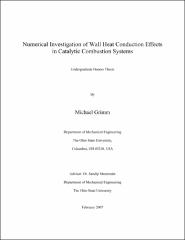 Catalytic converters are used in a variety of applications ranging from low-temperature combustion for gas turbine applications to the removal of pollutants from engine exhaust flow. Catalytic converters currently used in industry consist of a ceramic monolithic plug. This monolithic plug has a honeycomb-like structure, and is comprised of many small cylindrical channels (tubes), the inner surfaces of which are covered with a reactive catalyst. Determining the effect of the thermal conductivity of the monolith ceramic material on the ignition, flame stability, and steady state combustion will provide a scientific foundation with regard to the selection of materials for the construction of catalytic monoliths. This effect is investigated in this study through numerical simulations. Two commonly used materials are compared: cordierite, a ceramic with a low thermal conductivity, and silicon carbide, a ceramic with a high thermal conductivity. Another issue that is critical to the design of a catalytic converter is the length of the monolith plug. The optimum length of a monolith tube is one that completely converts the incoming flow while utilizing the entire length of the catalytic coating. In practice, the length is adjusted by stacking monolith plugs end-to-end, though it is unclear how different the end-to-end plugs are when compared to a single continuous tube of the same length. This study numerically investigates the effects of this practice, with the goal to determine if a tube of length 2L exhibits the same behavior as two identical tube sections placed end-to-end, each of length L. The commercial CFD software CFD-ACE+TM was utilized to investigate the afore-stated issues. The inlet flow rates of the methane-air mixture and the fuel equivalence ratio (or fuel-air ratio) were treated as parameters. Only lean and stoichiometric mixtures were considered because in practice catalytic combustion is not performed with rich mixtures. Catalytic combustion of a methane-air mixture on a platinum catalyst was used as the candidate system because the chemistry of this system is well documented. The models were set up and tested in an order of increasing complexity to ensure steady progress in the research. Beginning with simple flow and heat transfer, the model was extended to include a single step combustion reaction, and finally a detailed reaction mechanism consisting of 24 surface reactions between 19 species. Both steady-state and transient simulations were conducted. The results show that thermal conductivity of the ceramic monolith has a large effect on ignition, flame stability, and steady state combustion. The ceramic material with a high thermal conductivity value, namely silicon carbide, produces a stable flame over a much wider range of inlet flow rates than the ceramic material with a low thermal conductivity value, namely cordierite. Over their respective ranges of ignition, for both silicon carbide and cordierite, the maximum temperature of the monolith tube is more or less the same, indicating that there is no effect of thermal conductivity on the maximum temperature. Therefore, a case can be made for using silicon carbide instead of cordierite to create catalytic monoliths capable of handling a wider variety of inlet flow rates. The results also show that the ignition and blowout limits vary significantly between split and continuous tubes at high inlet flow speeds when the monolith tube walls are constructed from materials with high thermal conductivity; in this case, silicon carbide. For high inlet flow speeds there are significant differences between split and continuous tubes for the high thermal conductivity material. For monolith tubes constructed from materials with low thermal conductivity, such as the case of cordierite, there are no significant differences between split and continuous tubes over the entire flammability range. Additionally, for high thermal conductivity materials with low inlet flow speeds and low thermal conductivity materials for all inlet flow speeds over the range of ignition, the fuel conversion percentage does not significantly change and therefore, appears to be independent of inlet flow speed. These results imply that axial heat conduction, or lack thereof due to thermal contact resistance from an air-gap between the end-to-end monolith plugs, through the walls of the monolith results in thermal non-equilibrium between the solid and fluid phase, and subsequently affects ignition and flame stability in catalytic combustion.