Timbre as an Elusive Component of Imagery for Music 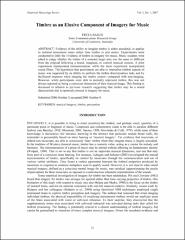 Evidence of the ability to imagine timbre is either anecdotal, or applies to isolated instrument tones rather than timbre in real music. Experiments were conducted to infer the vividness of timbre in imagery for music. Music students were asked to judge whether the timbre of a sounded target note was the same or different from the original following a heard, imagined, or control musical context. A pilot experiment manipulated instrumentation, while the main experiment manipulated sound filters. The hypothesis that participants are able to internalise timbral aspects of music was supported by an ability to perform the timbre discrimination task, and by facilitated response when imaging the timbre context compared with non-imaging. However, while participants were able to mentally represent timbre, this was not always reported as being a conscious dimension of their musical image. This finding is discussed in relation to previous research suggesting that timbre may be a sound characteristic that is optionally present in imagery for music.