Why Not Study Polytonal Psychophysics? 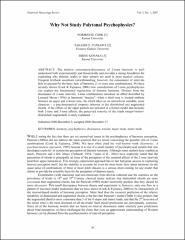 The relative consonance/dissonance of 2-tone intervals is well understood both experimentally and theoretically and provides a strong foundation for explaining why diatonic scales or their subsets are used in most musical cultures. Frequent textbook assertions notwithstanding, however, the consonance of intervals fails to account for the basic facts of harmony (3 or more tone combinations). We have recently shown (Cook & Fujisawa, 2006) how consideration of 3-tone psychophysics can explain the fundamental regularities of diatonic harmony. Distinct from the dissonance of 2-tone intervals, 3-tone combinations introduce an effect described by Leonard Meyer (1956) as harmonic “tension”: when a third tone is located midway between an upper and a lower tone, the chord takes on an unresolved, unstable, tense character – a psychoacoustical property inherent to the diminished and augmented chords. If the effects of the upper partials are included in a formal model that includes both 2-tone and 3-tone effects, the perceived sonority of the triads (major>minor> diminished>augmented) is easily explained.