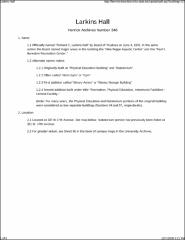 Larkins Hall was located at 337 W. 17th Avenue. The Natatorium portion had previously been listed at 321 W. 17th Avenue. This structure was officially named "Richard C. Larkins Hall" by the Board of Trustees on June 4, 1976. In the same action the Board named major areas in the building the "Hike Peppe Aquatic Center" and the "Paul S. Benedem Recreation Center". This structure was originally built as "Physical Education Building" and "Natatorium" and was also known as Hen's Gym, Gym, University Activities Center, Hen's Physical Education Bldg, Natatorium & Physical Education Bldg, and Natatorium & Gymnasium for Hen. The first addition was called "library Annex" or "library Storage Building". The second addition was built under the title "Recreation, Physical Education, Intramural Facilities--Central Facility". For many years, the Physical Education and Natatorium portions of the original building were considered as two separate buildings (Numbers 64 and 57, respectively).

Entry created by John H. Herrick June 9, 1977.
John H. Herrick Archives: Documenting Structures at The Ohio State University
The University Archives has determined that this item is of continuing value to OSU's history.