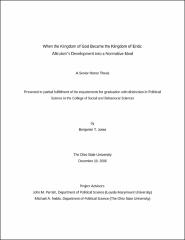 In contemporary moral philosophy, altruism holds a place of prominence. The current environment, so disposed to altruism, is peculiar when examined in the context of past moral debates. The concept of altruism made little sense in ancient philosophy, in which morality was understood as the highest form of self-interest. Ancient ethics' inability to convincingly argue for self-sacrificing action, such as political service, illustrates the disconnect between ancient and modern moral paradigms. This study endeavors to show how altruism developed into a normative ideal, as well as to reflect on whether this development makes sense. The first major shift towards normative altruism occurred with the rise of Christianity, which stressed the importance of earthly sacrifice in pursuit of a higher ideal--the Kingdom of God. The second major shift was Kant's introduction of the Kingdom of Ends, which, unlike Christianity, did not depend on the hope of future rewards. Despite their appeal, the resulting arguments for normative altruism ultimately fail because they have no motivational force on certain individuals. Altruism thus proves untenable as a moral ideal, but that does not in itself negate altruism's existence. In fact, evidence suggests that for some people altruistic motivation comes naturally. Rather than denying altruism, I want to suggest that we should think about it in descriptive, not normative, terms. Advisor: John Parrish