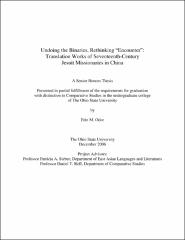 The act of translation is not merely the practice of employing appropriate substitutes in another language for various words and phrases, but is rather a creative and interpretive negotiation of political, historical, and cultural difference. This paper examines two instances of Jesuit missionary translation work in seventeenth-century China: Matteo Ricci’s "Tianzhu shiyi" (The True Meaning of the Lord of Heaven) (1603), a work written in Chinese for a Chinese audience, and the "Confucius Sinarum Philosophus" (1687), earliest published translation of three of the Confucian Four Books into Latin for a European audience. These two important works situate the missionaries between cultures - not as passive intermediaries, but as creators of a Christian-Confucian hybridity. More than locating points of equivalency of meaning, the Jesuit translators emphasized certain aspects of an older form of Confucianism that they saw as compatible with Christianity, and they reinterpreted both belief systems in ways that would appeal to each audience while avoiding the criticism of their European superiors as well as Chinese officials and supporters. By examining not only the effects of both source and target cultures on the creation of the "Tianzhu shiyi" and "Confucius Sinarum Philosophus," but also the influence of the two texts on their respective audiences, this project argues for a broader understanding of what constitutes translation and sheds light on this unique historical encounter between European Jesuits and Chinese elites. Advisors: Patricia A. Sieber and Daniel T. Reff