Intolerance for the Intolerant: Possible Moderators of the Quest Effect 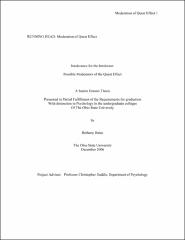 Once viewed as a universally-tolerant religious orientation, the quest orientation has been found to be associated with decreased acceptance toward those perceived as rigid and inflexible in their belief styles. It is unclear, however, whether the association between quest and interpersonal judgments is moderated by demographic or contextual variables. The present study specifically assessed whether associations between quest and judgments would differ by gender or by experience of mortality salience, variables that have been directly associated with tolerance in past research. To this end, a sample of 223 undergraduate students (95 males and 128 females), was asked to provide judgments and rate the traits of two hypothetical individuals: one tolerant toward homosexuality and flexible in religious beliefs and one intolerant and rigid. As expected, low-quest individuals did not differ in their judgments of the ‘open’ and ‘closed’ individuals, while high quest-individuals were more likely to view the ‘open’ person more positively and the ‘closed’ person more negatively. Gender moderated this effect as female judgments were significantly more dependent on differences in quest orientation than were male judgments. Finally, mortality salience did not interact with quest and interpersonal judgments, although males in the mortality-salience treatment group rated the positive traits of both open and closed individuals higher than did all other participants.