American Foreign Policy and Representation of Germans and French in Animated Feature Films since World War II: The Little Mermaid’s Pact with the Devil 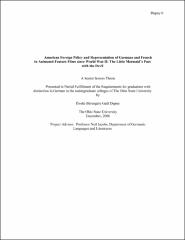 "French women don't shave their legs." "Germans love to eat sauerkraut and wear Lederhosen." We all know these stereotypes, but where do they come from? The most obvious answer is the media. The media reach thousands of viewers every day, and their representation of different ethnicites teaches viewers to associate certain characteristics with a particular ethnicity, thus creating stereotypes. Yet, what causes the media to portray a certain ethnicity in a certain light? It is my contention that stereotypes are altered to portray certain ethnicities in a more positive or more negative light, depending on the positive or negative foreign relations America has with the countries of those ethnicities. Close examination of full-feature animated films from 1945-2006 reveals that the positive representation of French and Germans fluctuates directly with the state of foreign affairs between the United States and these two countries. While relations were stable between France and America, Walt Disney productions released films such as Beauty and the Beast, which portray French men as hospitable, flirtatious, good cooks, and masculine, and portray French women and beautiful, flirtatious, and clean. After the deterioration of foreign relations between France and America following the September 11 attacks, stereotypes of French men turned from positive, to portraying them as effeminate, camp, and weak. The same comparisons can be made for America's relations with Germany. In conclusion, through the examination of Disney movies stemming from 1945 to now, I have found enough evidence to support my claim that the state of foreign affairs between France and Germany is directly correlated with how French and Germans are represented in animated films. Advisor: Neil Jacobs