Interview of Martin A. Pomerantz by Brian Shoemaker 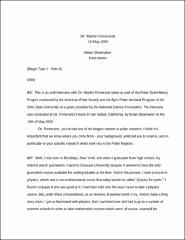