Commentary on Cook & Fujisawa's "The Psychophysics of Harmony Perception: Harmony is a Three-Tone Phenomenon" 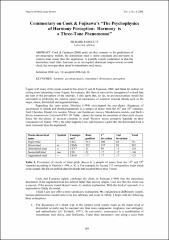 Cook & Fujisawa (2006) point out that, contrary to the predictions of psychoacoustic models, the diminished triad is more consonant and prevalent in western tonal music than the augmented. A possible simple explanation is that the diminished triad often functions as an incomplete dominant (major-minor) seventh chord, the most prevalent tetrad in mainstream tonal music.