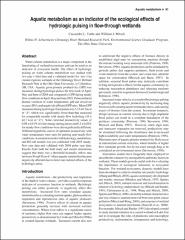 Water column metabolism is a major component in the functioning of wetland ecosystems and can be used as an indicator of ecosystem health. The effect of hydrologic pulsing on water column metabolism was studied with two yearʼs field data and a validated model for two 1-ha created riparian wetlands at the Olentangy River Wetland Research Park at the Ohio State University, in Columbus, OH, USA. Aquatic gross primary productivity (GPP) was measured during hydrologic pulses the first week of April, May and June of 2004 and compared to GPP during steady flow-conditions in April, May and June 2005. Pulses reduced diurnal variation of water temperature, pH and dissolved oxygen (DO), and negatively affected GPP rates. Mean GPP measured during hydrologic flood pulses was 5.13 ± 0.3 kcal m-2 d-1, which was significantly lower than that measured for comparable months with steady-flow hydrology (11.4 ±0.7 kcal m-2 d-1). Solar corrected productivity values of 0.08 ± 0.01% of solar energy during pulses and 0.2 ± 0.02% for steady-flow conditions were also significantly different. Different hyperbolic curves of optimum productivity with water temperature were seen for pulsing and steady-flow conditions. A simulation model with hydrology, metabolism, and DO sub models was was calibrated with 2005 steadyflow year data and validated with 2004 pulse year data. Results from both the field study and model simulations suggest that there was a threshold hydraulic inflow rate between 30 and 50 cm d-1 where aquatic metabolism became negatively affected due to direct and indirect effects of the hydrologic pulse.