Denitrification in created riverine wetlands: Influence of hydrology and season 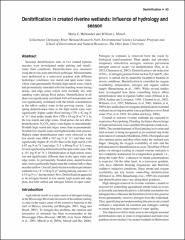