The Psychophysics of Harmony Perception: Harmony is a Three-Tone Phenomenon 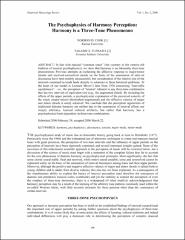 In line with musical “common sense” (but contrary to the century-old tradition of musical psychophysics), we show that harmony is an inherently three-tone phenomenon. Previous attempts at explaining the affective response to major/minor chords and resolved/unresolved chords on the basis of the summation of interval dissonance have been notably unsuccessful, but consideration of the relative size of the intervals contained in triads leads directly to solutions to these historical problems. At the heart of our model is Leonard Meyer’s idea from 1956 concerning “intervallic equidistance” – i.e., the perception of “tension” inherent to any three-tone combination that has two intervals of equivalent size (e.g., the augmented chord). By including the effects of the upper partials, a psychophysical explanation of the perceived sonority of the triads (major>minor>diminished>augmented) and the affective valence of major and minor chords is easily achieved. We conclude that the perceptual regularities of traditional diatonic harmony are neither due to the summation of interval effects nor simply arbitrary, learned cultural artifacts, but rather that harmony has a psychophysical basis dependent on three-tone combinations.