Calculating Sensory Dissonance: Some Discrepancies Arising from the Models of Kameoka & Kuriyagawa, and Hutchinson & Knopoff 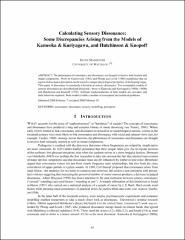 The phenomena of consonance and dissonance are thought to involve both learned and innate components. Work by Greenwood (1961) and Plomp and Levelt (1965) established that an aspect of dissonance perception can be traced to unique physiological properties of the hearing organ. This aspect of dissonance is commonly referred to as sensory dissonance. Two computable models of sensory dissonance are described and discussed—those of Kameoka and Kuriyagawa (1969a; 1969b) and Hutchinson and Knopoff (1978). Software implementations of both models are provided, and their behaviors explored. Both models exhibit a number of conceptual and technical problems.