A Cognitive Approach to Medieval Mode: Evidence for an Historical Antecedent to the Major/Minor System 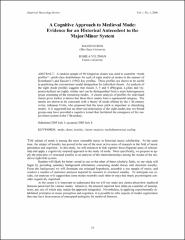 A random sample of 98 Gregorian chants was used to assemble “mode profiles”—pitch-class distributions for each of eight medieval modes in the manner of Krumhansl’s and Kessler’s (1982) key profiles. These profiles are shown to be useful in predicting the conventional modal designation for individual chants. An analysis of the eight mode profiles suggests that modes 3, 5 and 8 (Phrygian, Lydian and Hy-pomixolydian) are highly similar and can be distinguished from a more heterogeneous group consisting of the remaining modes. A cluster analysis of profiles for individual chants gives further evidence that these three modes form a supramodal category. The results are shown to be consistent with a theory of mode offered by the 11th-century writer, Johannes Cotto, who proposed that the tenor pitch is important in classifying modes. It is suggested that an observed polarization of the eight modes into two broad groups may have provided a cognitive kernel that facilitated the emergence of the major/minor system in the 17th century.