Calder and Mondrian: An Unlikely Kinship 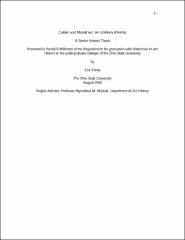 In October, 1930, sculptor Alexander Calder was introduced to painter Piet Mondrian, and he was at once struck with inspiration: “It was a very exciting room. Light came in from the left and from the right, and on the solid wall between the windows there were experimental stunts with colored rectangles of cardboard tacked on. Even the victrola, which had been some muddy color, was painted red. I suggested to Mondrian that perhaps it would be fun to make these rectangles oscillate. And he, with a very serious countenance, said: ‘No, it is not necessary, my painting is already very fast.’ This visit gave me a shock . . . This one visit gave me a shock that started things.” Mondrian’s apartment was organized along the ideals of Neo-Plasticism, a theoretical movement based on the pursuit of purity in abstraction. For the first time, Calder observed abstract art, and he immediately reacted as a sculptor. His initial response was to propel the colored rectangles, to move them into the third dimension. Calder’s brief introduction to abstraction eventually led to his creation of what Marcel Duchamp termed “mobiles” - kinetic sculptures constructed of carefully balanced parts hanging from a ceiling. These sculptures are the fully realized form of Calder’s initial reaction to Mondrian’s apartment. They bring actual, physical movement to the geometric shapes tacked on Mondrian’s walls. Although Mondrian’s paintings had an intrinsic rhythm, it wasn’t until Calder began to create mobiles that Neo-Plastic art truly realized physical motion. This study will explore Calder’s art in order to illustrate their progression from the second dimension into the third. Drawing from specific oil paintings, wall mobiles (mobiles that extend from a wall and not a ceiling), stables (sculptures that resemble a mobile but have no kinetic parts), mobiles, and monumentals (stabiles made on an immense scale), the research will show the inherent Neo-Plastic nature of Calder’s oeuvre. It must be noted that this is a visual development, and not necessarily a chronological one. However, the evolution of his art must begin with the initial historical catalyst: Calder’s visit to Mondrian’s apartment. From this point, I will trace the maturation of Neo-Plastic kinetic theory as the medium extends from the flat plane of the canvas to the three-dimensional space of the mobiles. By examining Calder’s art through the medium, I will show that his abstract works are deeply rooted in the Neo-Plastic ideals that Mondrian first demonstrated to Calder one day in October.