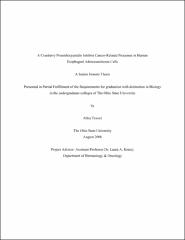 Esophageal cancer is the sixth most common cause of cancer death of US males today, and the rate of this cancer has increased in recent years, possibly caused by the increase in obesity, chronic acid reflux, and poor diet. Preliminary studies in our lab showed that cranberry proanthocyanidin (PAC) treatment of human esophageal adenocarcinoma inhibits multiple carcinogenic-associated processes. Thus, this study aimed to understand the mechanism by which PAC treatment affects such processes by characterizing specific markers of apoptosis and cell cycle regulation, two key pathways dysregulated during the progression to cancer. The SEG-1 human esophageal cancer cell line was utilized in this study, derived from a Barrett’s-associated adenocarcinoma of the distal esophagus. The SEG-1 cells were treated with 50μg/ml PAC for 6 hrs and microarray analysis performed. WEDGE ++ was then used to remove extreme outliers, followed by EASE analysis to determine the gene ontology groups that were significantly overrepresented in the significantly up and down-regulated genes. Real-time PCR using pathway plates for apoptosis and cell cycle distribution was then used to validate the data collected from the microarray studies. Alterations in many genes were found with increased apoptosis and changes in cell cycle activity. The results support that cranberry proanthocyanidins dysregulate many processes associated with esophageal cancer development. Further studies are suggested to study PAC’s affect over longer periods of time and its cancer inhibitory potential in vivo. Advisor: Laura A. Kresty