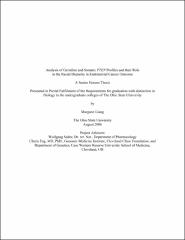 Endometrial cancer is the most common gynecological malignancy in the United States. Poorer prognosis and higher mortality rates for endometrial cancers in African-Americans compared to those in whites have revealed a racial disparity in this disease. In contrast to other solid tumors, several studies paradoxically have supported somatic PTEN mutations and microsatellite instability (MSI) as favorable prognostic features. The aim of this study was to determine whether there is a racial disparity in the frequency of these molecular alterations that may contribute to differences in endometrial cancer outcome. We scanned paired germline and tumor DNA from 53 endometrial cancer patients for somatic mutations in the PTEN gene, loss of heterozygosity (LOH) around 10q22-q24, and global MSI according to Bethesda recommendations. Fourteen somatic mutations were found in 8 of 26 (31%) tumors from African-American (AA) individuals and were almost exclusively a feature of endometrioid cases (11 of 14 mutations; 79%). Eleven somatic PTEN mutations were found in 7 of 27 tumors (26%) from white women (NAA), with 5/11 of the mutations (45%) present in endometrioid cases. Of the 25 informative AA samples, 15 (60%) exhibited LOH at one or more loci, while LOH was observed for at least one locus in 19 of 26 (73%) informative NAA samples. Consistent with previous studies, 5/25 (20%) AA and 5/26 (19%) NAA patients were MSI-positive. In addition, 10 single nucleotide polymorphisms (SNPs) and their reconstructed haplotypes were examined as host factors to investigate the association of specific genomic regions of the PTEN locus with endometrial cancer and its prognosis. Most importantly, the distribution of haplotypes revealed significant differences between the two racial groups (2= 13.814, P = 0.032). In particular, haplotype 3, CTIAGTATCC, was most clearly over-represented in AA (37%) compared to NAA (15%, P = 0.014). The results of this study confirmed previous evidence that somatic PTEN mutations are associated with the favorable endometrioid histology (P = 0.015), irrespective of race. Additionally, novel differences were observed between the two racial groups in the PTEN haplotype analysis. Although no specific associations were found in this limited haplotype analysis, haplotype 3 was identified as a candidate for further study as a germline component in endometrial cancers that perhaps may predispose AA to certain unfavorable prognostic factors and thus contribute to the racial differences in outcome. A trend among the haplotype distribution was also observed between the endometrioid and non-endometrioid study groups (2= 11.870, P = 0.065), further suggesting that certain haplotypes perhaps could affect histology and consequently influence the racial disparity. Taken together, we conclude that none of the somatic molecular alterations per se independently account for the observed racial disparity in endometrial cancer outcome; however, cumulatively, these data suggest that genetic factors likely contribute to this disparate clinical outcome, perhaps additively or acting in concert, and certainly require further investigation. Advisors: Dr. Wolfgang Sadee, Dr. Charis Eng