"Integration, not Segregation:" Japanese Americans in Chicago and Cleveland, 1942-1952 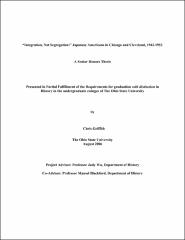 College of the Arts and Sciences Undergraduate Research Scholarship