Eavesdropping with a Master: Leoš Janáček and the Music of Speech 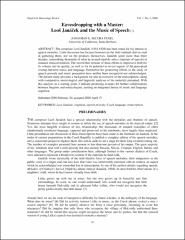 The composer Leos Janácek (1854-1928) has been noted for his interest in speech melodies. Little discussion has focused however on the field methods that he used in gathering them, nor on the products themselves. Janácek spent more than three decades, transcribing thousands of what he termed nápevky mluvy [tunelets of speech] in standard musical notation. The record that remains of these efforts is impressive both for its volume and its quality, as well as for its potential to reveal aspects of the perceptual overlap between music and language. Heretofore his pioneering efforts in the study of speech prosody and music perception have neither been recognized nor acknowledged. The present study provides a background for and an overview of the transcriptions, along with comparative musicological and linguistic analyses of the materials presented. With this analysis as a starting point, I indicate promising avenues for further collaborations between linguists and musicologists, seeking an integrated theory of music and language cognition.