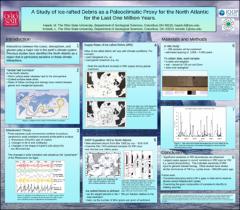 The North Atlantic is a climatically sensitive region on Earth, due to the interactions between the ocean, atmosphere, and cryosphere (i.e., glaciers) that have occurred there on timescales of tens of thousands to hundred of thousands of years. In addition, the North Atlantic appears to be prone to periods of abrupt climate change (on the order of thousands of years or less). Understanding the mechanisms and causes of such episodes of abrupt climate change is one of the major challenges in global climate change research today. However, records with sufficient detail to reveal episodes of abrupt climate change only extend back for several tens of thousands of years. As a result, research in abrupt climate change requires the development of longer and more detailed records of paleoclimatic proxies (i.e., sediment components that carry information about past oceanographic, atmospheric, and glacial conditions). This study is a step toward developing such a record for sediments transported from land into the North Atlantic by icebergs (ie, ice-rafted debris or IRD). Increases in the abundance of IRD are interpreted to record times of glacial expansion to sea level (when icebergs can be released), and the composition of the IRD can be used to identify the source area(s) and/or the dispersal trajectory of those icebergs. This study will examine samples from cores takes at Site 1305 during Expedition 303 of the Integrated Ocean Drilling Program. Site 1305 is located on the Eirik Drift off the southeastern coast of Greenland, and lies within the zone where previous studies have identified abundant IRD. The cores taken from Site 1305 have been used to construct a continuous composite section for at least the last one million years. Approximately 400 samples have been taken for this study with an estimated time spacing of 3000-4000 years between samples. Over the next month, these samples from IODP Site 1305 will be analyzed to determine the abundance of IRD. Various definitions for IRD have been proposed in past studies; for this study, IRD will be defined as the lithic grains in the >150 m fraction. The IRD abundance will be defined two ways: as the weight percent of the >150 m fraction relative to the total sediment and as the number of lithic grains per gram of sediment. To obtain data, each sample will be dried, weighed, wet-sieved at 150 m and 2mm, dried, and reweighed. The >150 m fraction will then be examined using a binocular microscope to determine the number of lithic grains and the abundances of various grain types. Sample ages will be determined using an age-depth model developed by the Expedition 303 Scientific Party.