Ineffectiveness of Sulfur-Based Odors as Nesting Deterrents Against European Starlings 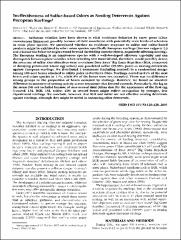 Sulfurous volatiles have been shown to elicit avoidance behavior by snow geese (Chen caerulescens Linnaeus), possibly because of their association with potentially toxic levels of selenium in some plant species. We questioned whether an avoidance response to sulfur and sulfur-based products might be exhibited by other avian species, specifically European starlings (Sturnus vulgaris L.) and whether the behavior might extend beyond the feeding context (that is, negatively affecting nesting). The European starling is an omnivorous species with a well-developed olfactory capability and can distinguish between plant volatiles when selecting nest material and, therefore, could possibly detect the presence of sulfur. Our objectives were to evaluate Deer Away® Big Game Repellent (BGR, composed of decaying putrescent whole egg solids) and powdered sulfur (99.98% pure) as nesting deterrents against European starlings. We distributed 3 treatments (including control) in a randomized design among 100 nest boxes attached to utility poles in Northern Ohio. Starlings nested in 81% of the nest boxes and other species in 11%, while 8% of the boxes were not occupied. There was no difference among groups in the proportion of boxes occupied by starlings. However, we found an absolute difference in measures of nesting activity across treatments that favored controls. Particularly, the lag in the mean (SD not included because of non-normal data) Julian date for the appearance of the first egg (control: 134, BGR: 138, sulfur: 138) in treated boxes might reflect occupation by younger, less experienced starlings. We conclude, however, that BGR and sulfur are not effective nesting deterrents against starlings, although they might be useful in enhancing other deterrents.