A Comparison of Ordinary Least Squares and Logistic Regression 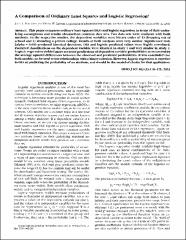 This paper compares ordinary least squares (OLS) and logistic regression in terms of their underlying assumptions and results obtained on common data sets. Two data sets were analyzed with both methods. In the respective studies, the dependent variables were binary codes of 1) dropping out of school and 2) attending a private college. Results of both analyses were very similar. Significance tests (alpha = 0.05) produced identical decisions. OLS and logistic predicted values were highly correlated. Predicted classifications on the dependent variable were identical in study 1 and very similar in study 2. Logistic regression yielded more accurate predictions of dependent variable probabilities as measured by the average squared differences between the observed and predicted probabilities. It was concluded that both models can be used to test relationships with a binary criterion. However, logistic regression is superior to OLS at predicting the probability of an attribute, and should be the model of choice for that application.