A Breeding Bird Survey of the Natural Areas at Holden Arboretum 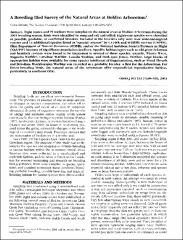 Eight routes and 79 stations were sampled on the natural areas at Holden Arboretum during the 2001 breeding season. Birds were identified by song and call and tallied. Eighty-one species were classified as possible, probable, or confirmed breeders. Included in the breeders tally were four state-endangered species and 13 additional species listed as special interest by US Fish and Wildlife Service (USFWS), Ohio Department of Natural Resources (ODNR), and/or the National Audubon Society/Partners in Flight (NAS/PIF) because of significant population declines. Specific habitat types such as old growth forests and hemlock ravines were found to be important to several of these species, namely, Winter Wren, Magnolia Warbler, Cerulean Warbler, Canada Warbler, and Dark-eyed Junco. Further, large blocks of appropriate habitat were available for some species intolerant of fragmentation, such as Wood Thrush and Bobolink. Blackburnian Warbler was recorded as a probable breeder, a first for the Arboretum. For forest breeding birds, the natural areas of the Arboretum offer unparalleled reproductive habitat, particularly in northeast Ohio.